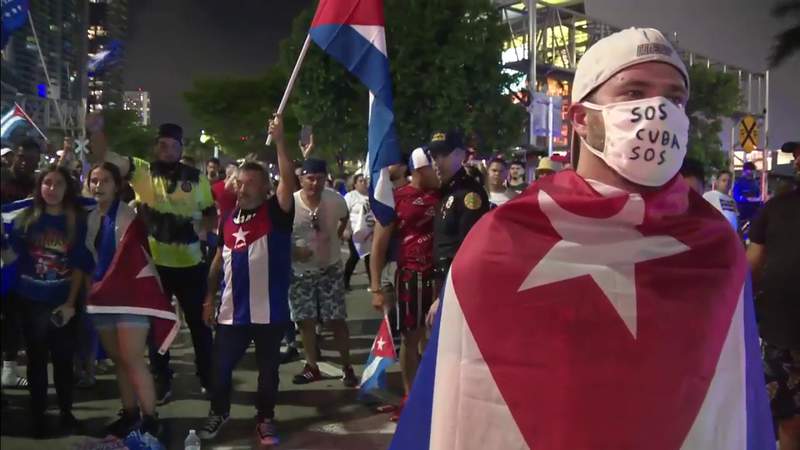 Miami police escorted the protesters as they marched east on Eighth Street. Officers blocked intersections to allow them to turn north toward Biscayne Boulevard.

To get to the building that housed the US Cuban Assistance Center from 1962 to 1974, protesters passed through Bayfront Park, near where a group of boaters carrying the American and Cuban flags had met earlier.

They walked for about five miles and when they got to the 17-story Spanish Renaissance-style building at 600 Biscayne Blvd., some of the Cuban-American children heard stories from parents.

Fidel Castro was enforcing Communist policies when their ancestors fled the island with whatever they could take. The United States granted them political asylum and assistance with health care and housing.

The area where Miami Heat fans gather now before games are known as “Ellis Island of the South”. The sudden wave of refugees turned into “El Refugio” camp. Some were sleeping on the floor while waiting for identity cards and help.

During Wednesday’s protests in Miami-Dade, Cuban President Miguel DÃ­az-Canel admitted his administration made mistakes in a televised speech.

It was an unexpected statement since Raul Castro’s mentee blamed Sunday’s uprising on an American social media plot and the crisis on the American embargo.

DÃ­az-Canel also said the protesters acted with “hatred” when they committed “armed acts” because they did not want the “revolution to develop or a civilized and respectful relationship” with the United States.

Cuban civilians are not allowed to buy weapons and videos show those armed with guns, rifles and baseball bats were police officers. Activists said the government was behind the bloodshed.