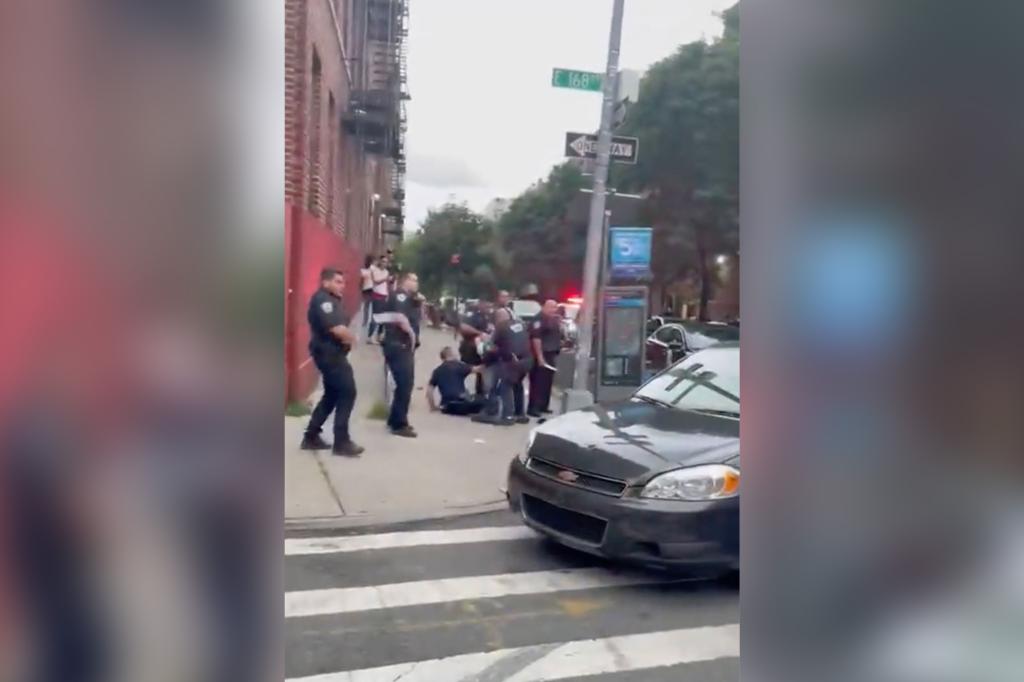 Several cops were punched and pelted with glass bottles by a rowdy group of men in the Bronx after the borough’s Dominican Day parade on Sunday.

A group of young men began throwing punches and then bottles at the officers in a chaotic scene caught on video as cops attempted to arrest a man for possession of a firearm.

The unruly men reportedly drank in the street, played loud music and blocked traffic at the intersection of 168th Street and Sheridan Avenue, near the route of the Dominican Day parade which ended shortly before the out-of-control incident, police sources said.

Police responded to the scene to break up the ongoing party and encountered a man with a gun around 7:30 p.m.

As they handcuffed the armed individual, others in the crowd began to fight with the officers, according to the video and law enforcement sources.

Several people can be heard in the video asking the cops why they were pushing the man before the wild fight unfolded.

“Yo, step back! Go home!” a cop yells at the person filming.

As officers escort the man to a waiting police vehicle, a man wearing a black mask and black baseball cap can be seen in the video reaching out to one of the cops – possibly punching him – be.

The officer then pushes the masked man and throws him to the ground as additional cops pile on top of him.

“Look, they’re hitting him,” a person can be heard shouting.

The officers push the others away before a man in a yellow shirt comes cheekily towards the officer who has urged the group to back off with raised fists.

The crowd separates from the police and someone, off camera, begins throwing glass bottles at the cops across the street. Officers run and dodge projectiles as the sound of glass breaking can be heard in the video.

At least six people were arrested during the pandemonium – one for possession of firearms and the others for disorderly conduct, the sources said.

The melee unfolded two and a half hours after a man was shot about four blocks north while the parade was still moving through the Grand Concourse.