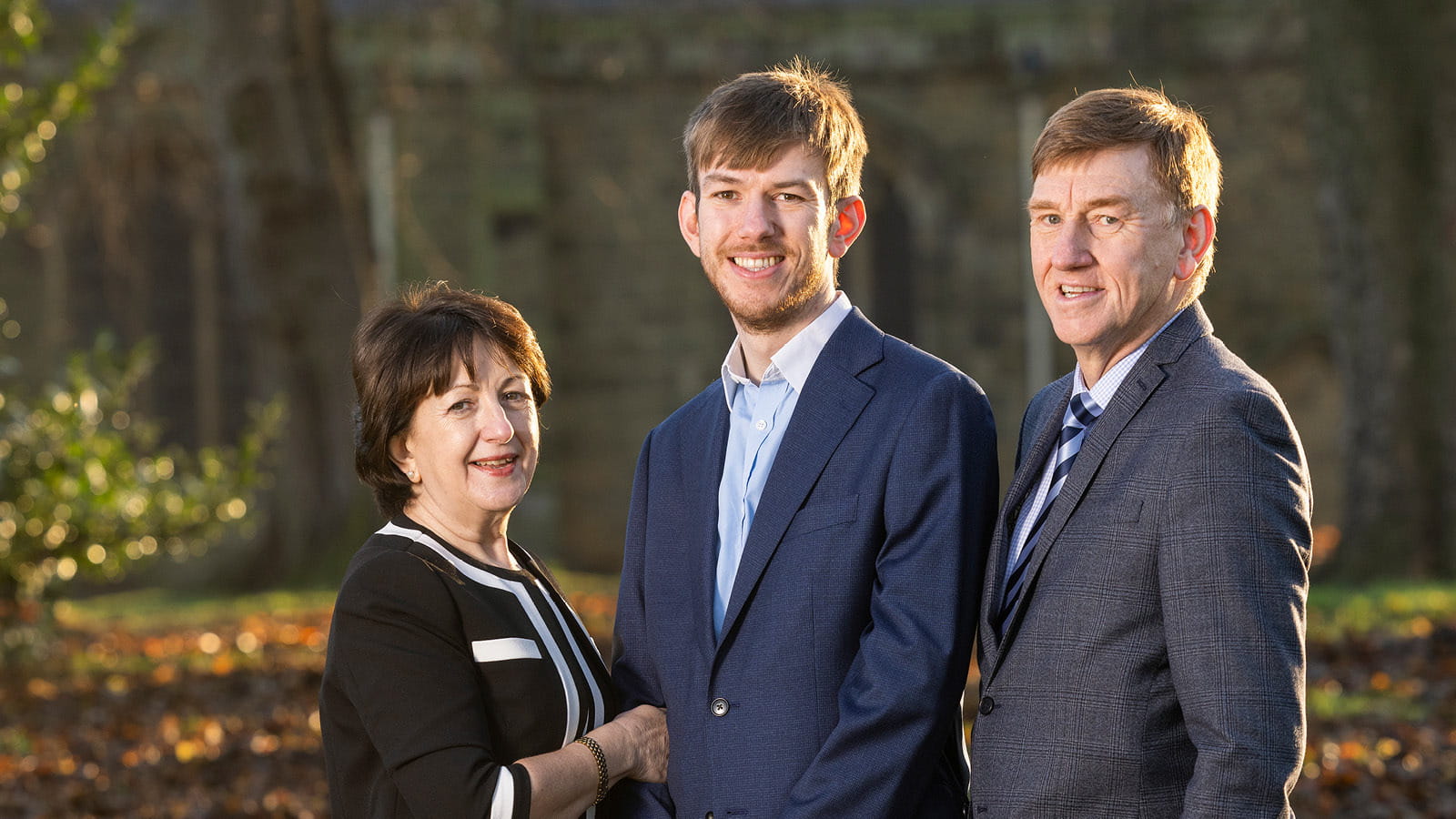 For Colin and Julie Hutson and their son Sam, their thriving practice in Northallerton, North Yorkshire is a family affair.

When Colin and Julie Hutson started their own practice in 2013, they had no idea what would become of a family business. â€œI trained with Price Waterhouse, and that’s actually how we met – I went to audit Julie at the local county council,â€ says Colin. “We weren’t really supposed to go out with clients, but I asked her to go out and 10 months later we got married.”

After Price Waterhouse, Colin worked at Haines Watts and regional firm Clive Owen before becoming a partner at Kenneth Easby in Northallerton. â€œI was there for about 15 years, but the partnership changed and that wasn’t what I wanted to do – I wanted to work more closely with clients and be able to offer this personalized service,â€ said himself. he remembers. He hadn’t really considered the possibility of settling down on his own, until one day he and Julie started talking.

â€œI had always worked for the departmental council for children and young people, and I was very passionate about what I was doing,â€ explains Julie. â€œI had all these skills that Colin didn’t have, and vice versa, and we thought maybe we could team up and do something. Knowing that Sam would also be branching out into the profession, we figured it would be something he could have for himself in the future if he wanted to.

It didn’t take long for Sam to join them – despite the fact that he initially had no plans to become an accountant. â€œI’m going to be honest, if there’s one thing I never wanted to do was do an audit – and I thought that was what accountants were doing,â€ he says. â€œAfter I graduated, I started to embrace the idea, and then I chatted with Lorna Hansell, Regional Director of Business Development at ICAEW, at a career fair. She knew my father and suggested a course to me at Newcastle University, and also made me realize that I didn’t necessarily have to end up in a big company. I said I’d take a look – and a few years later, here I am.

â€œA lot of it was because I talked to dad more and understood what his job really was,â€ Sam adds. â€œUnderstanding that there is tax, there is VAT, there is VAT. preparing the accounts – you get a full picture of the client from start to finish which is one of the things I really appreciate. It turned out that was all I was promised. You have this personal relationship with your customers and you feel like you are helping them in a tangible and meaningful way. It is truly fulfilling.

For Colin, it wasn’t quite a surprise that Sam ended up following in his footsteps. â€œWe always knew he had the skills,â€ he says. â€œHe was very good at math, and he was obviously interested in business and finance. He’s very sympathetic, so we knew he had that side and the technical ability behind it – but he didn’t entertain him because that’s what I did! So we always knew he had it, but that was whether he wanted it or not. It has continued to grow stronger and has developed many solid relationships with its clients in recent years.

The practice started with just four staff: â€œThere was Colin and myself, a lady named Samantha and a young man named Samuel – not the same,â€ says Julie. But it wasn’t until two months before their own Sam joined them – and it was the promise of two computer screens that really landed him. â€œHe was in another accounting firm that used less computer software, whereas here all the staff had two giant screens,â€ recounts Julie. â€œIt feels like a dream come true when you write in pencil on A3 sheets of paper – especially since my handwriting is so bad,â€ Sam agrees. â€œSo that was about it. “

A few clients came with Colin, and the business was quick to take off, in part thanks to his and Julie’s involvement in the local community – as well as their friendly and personal approach. “We’re pretty well known because of the circles we operate in – we’re part of Round Table, Ladies’ Circle, Tangent Club, 41 Club – and people have started asking us to do their accounts and their tax returns,” explains Julie. â€œPeople kept coming towards us and it started to snowball. There was one case where a client’s books were mistakenly delivered to us instead of another business down the road. When we called to let them know, we told them to come see us if they were ever looking to change accountants – and they have been with us ever since. We are really very friendly.

The fact that it is a local family business is a key selling point for customers, many of whom are family businesses themselves. â€œWe often hear people say, ‘It’s because you’re a family business, we know you’ll understand us,’ says Julie. â€œWe decided from the start that we didn’t want to go as big or as big as a company – we wanted to provide a more personalized and private type of customer service,â€ adds Colin. â€œA lot of the clients who came with us were with me at Clive Owen and Kenneth Easby, so we’ve known them for about 30 years. We know their sons and daughters, and we’ve helped them through a lot of weird and difficult times – and nothing more than the past 18 months.

The Hutsons are an integral part of the community of Northallerton, which has thrived in recent months. â€œJulie and Colin have been very involved in this project, especially the Business Improvement District, city council and all kinds of community projects and events,â€ Sam said. â€œWe try to recover and work with others and getting to know people, â€says Julie. â€œColin always says I have guerrilla marketing skills because we don’t do corporate work – we just support our friends and colleagues. We’re on Main Street and we all know our neighbors, so we’ll drop by to say hello to them, and they’ll drop by to say hello. Colin adds: â€œJulie ran an 80-person department in city council, so our business was a snap in comparison – but it gave us that more community feeling, that closer connection to people. and the city. “

As the business grew, they hired more staff, including an aunt, two nephews, and a third IT contractor. There are now 14 staff members in total, and there are plans to add at least three more this year. â€œIt all depends on who we know – all the staff except one we knew before we hired them,â€ says Julie. â€œSo we have a lot of confidence in them. We are our own little community and family. We are very supportive of our staff and looked after them the best we could during difficult times. They make sure they have fun too, Sam adds. “It’s not all work and no play – if there is a chance to bake a cake, we bake a cake.”

In addition to working together, Sam has been living with his parents since the start of the first lockdown in 2020, with his younger brother Jonathan. â€œOne of the benefits of working together is that you have that base of support and trust; you know you can go to each other with more or less anything, “Sam says.” And then I guess a downside is you can’t complain about your boss over breakfast. ! In turn, he brings a different dynamic to the business, says Julie, and a relationship for some of their younger clients and employees. “I can translate and maybe talk about a TikTok meme!” ” he says.

Because of living and working so closely together, it’s important to Sam that he has interests and opportunities outside of the office – one of which is his current role as Vice President of the Student Council of ICAEW (ISC). â€œI’ve always been interested in getting involved with ICAEW and the communities they offer,â€ he says. â€œI started getting involved with the Northern Students’ Society, NCASS, and quickly took over as a representative for Teesside. Having these outside interests helps me give myself my own space and room to learn other things. My work with ICAEW has helped me put a face to the organization; it helped personalize it and make it feel like a community. That perspective is something I want to try to deliver not just for ourselves, but for businesses across the Northeast and across the country. “

For Colin too, one of the perks of having his own business was the opportunity to get more involved in ICAEW. â€œWhen we settled in and Julie and I were looking for support, we found the Northern Society of Chartered Accountants really, really great,â€ he says. â€œThey were fantastic in helping us get settled. We took the New Business Course – and two years later we were asked to go present and tell our story. You can talk to colleagues about the profession, and this is not a competition. This is what I came to understand, especially about the Northern Society: people support each other and are just happy to help each other. “

Sam also forged new relationships through the Leadership Development in Practice (DLiP â„¢) program at ICAEW, as part of the family’s long-term succession planning. For Colin and Julie, it’s about securing a successful business that will hopefully be in Northallerton for many years to come, possibly with Sam at the helm. â€œPeople love that Sam is here and that they can see that there is a future there,â€ Colin says.

â€œWe’re definitely on the right track,â€ Sam adds. â€œIt’s just trying to make sure that we are growing sustainably and conscientiously so that it’s not too big, too fast, or too slow. last thing we want to do is become something that we are not by becoming more corporate; we want to keep that feeling of close family that we already have. This is to make sure that when we get to develop ourselves and to grow, we maintain this culture until the end. â€

We haven’t even covered 20-30% of the digital transformation journey yet:…

Options after a BBA/BBM – The Hindu