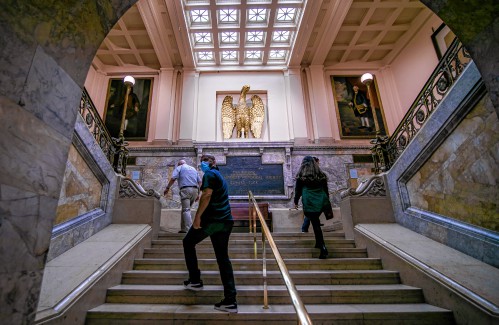 A motorcade of three cars stopped in front of the Gibson bookstore in Concord. Surprised passers-by on North Main Street watched plainclothes officers wearing earmuffs cautiously walk a navy-suit man from a limousine into the bookstore. As he roamed, his protective entourage surrounded him, preventing other buyers from getting too close and spotting emergency exits.

This scene was not an unexpected visit by a political candidate or a foreign leader, but an exercise for local law enforcement: the practical exam following a week-long training course organized by the Security Service diplomatic service for New England officers.

With offices across the country, including in Boston and Portsmouth, the Diplomatic Security Service is the law enforcement arm of the United States Department of State. While the secret services protect the most prominent foreign leaders and sitting heads of state, the diplomatic security services keep a sort of B-list of foreign dignitaries, like former ministers and their spouses, who still need help. protection.

Two officers from the Concord Police Department and six soldiers from the New Hampshire State Police joined law enforcement officers from Maine, Vermont, Massachusetts and Rhode Island this week for the first training of this type includes federal, state and local agencies in the five states. Members of the Police Department from Brown University and Harvard University were also in attendance.

During the week, the 25 participating officers trained to drive in a motorcade on the New Hampshire Motor Circuit in Loudon and defend a dignitary in crowded areas of Concord.

Five years ago, this was the last time that the Diplomatic Security Service offered one of these trainings to local law enforcement groups. The agency relies on local and state police to help its officers – including the five located in the Portsmouth office – defend visitors who fall under the protection of the State Department.

“We constantly ask them to provide protective support to our security operations when we have visiting dignitaries coming to the United States,” said Jon Davidson, the special agent in charge of the Boston Field Office of Security Services. diplomatic, who acted like a false dignitary. at Gibson Friday. “It also allows them to have specialist knowledge and subject matter expertise, when it comes to protecting their own mayors, governors, state and local,” Davidson said.

Acting US attorney John Farley played the role of a second â€œprotÃ©gÃ©â€ for another group of interns.

On Friday, processions traveled to the New Hampshire Historical Society and Rollins Park as well as the Gibson Bookstore. Officers were instructed to plan breaks and toilet visits in advance, while reacting in time to the whims of bogus dignitaries. The ability to perform under stress and quickly detect any signs of danger is key, participants learned.

â€œThis is the real final exercise in which we put all of these skills learned this week together to see how it works,â€ Davidson said, â€œand it seems to be working really well.â€

While these skills are necessary when the diplomatic security service partners with local agencies to protect visiting foreign dignitaries, police can also use these strategies to ensure the safety of more local figures.

“New Hampshire is an important state when it comes to election season, having the country’s first primary, which brings multiple visits from candidates from across the country almost daily,” said Police Sgt. New Hampshire State, Keith. Walker said.

Some of the state soldiers trained this week work in the Executive Security Unit, which is responsible for protecting the governor. Training to conduct parades will also help state police, as parades carrying politicians or presidential candidates can involve up to 100 soldiers, Walker said.

â€œBeing able to learn some of the advanced techniques that this agency has shown us will only improve our efforts with them, when we need to provide security services to them,â€ Walker said.

While the DSS regularly trains local officers in security techniques at its Foreign Affairs Security Training Center in Blackstone, Va., This was the first training held for both officers from the five states of the New England. â€œIt’s very crucial for relationship building, especially coming out of COVID quarantines,â€ Davidson said.

The DSS paid for the training, including fully armored vehicles used on Friday, while local agencies paid for officers’ accommodation and other expenses during the week.